At the London SIM a couple of days ago, while taking these pictures, I ran into a one day old noob who approached me to say that even though he liked my dress my shape was all wrong.

¨You definitely need a better shape, and I can help you find one. ¨   He said.

I raised by cam to see him better.  A milky white, blonde male, with a Japanese female robe, boobs and of course noobie feet and hands! Sort of like a primitive, blander version of The Ken doll that my Barbie doll ditched for the more rugged G.I Joe. He had no information whatsoever on his profile and was sporting the usual noobie duck walk we all use when we first arrive to SL.

I gestured a sobbing animation and he must have felt very sorry for me because he then said:

¨please don’t cry.  Look your body is not so bad, but your face really needs help.¨

I gestured an even harder sob and told him my head was kind of styled based on RL looks, to which he replied he had to tell me the truth.

If so, I guess, because arrogance is reckless?

Perhaps I do need help, I mean who doesn´t at least from time to time, but this guy really needed it more than me.   So in spite of his rude temerity, and because he bordered on the hilarious, I decided to take him to The Gizza Male Freebie Zone so that he could get himself some decent clothing and got him an AO that he did not even know he needed.  Being only one day old he had not yet even noticed the difference between the walks.  My guess is that he was really a noob and not an ALT.

As for me, oh well this lil´old bod is the one and only Maitreya Mesh Body, which to me has a beautiful form. As Mesh Bodies go I do prefer to wear TMP, but the choices for shoes are so very limited and this can be restrictive.  If you want to wear your Slinks you will need either the Maitreya or the Slink Mesh Bodies because most footwear doesn´t work with TMP.

The head is one of the new Lelutka´s and in spite of our noob´s opinion –  which he later claimed was a joke.  Shall we believe him? –  these faces are very beautiful, even doll like.  Perfect for those who prefer a younger look.

The only problem I have with them is that they are way too perfect. I usually prefer a little flaw here and there.  I find this gives us character and strength, making us look more natural.  So in order to own the head and make it more me (circa 15 years ago!) I used the eyebrows and freckles from one skin applier brand, the eyeshadow from another and the lip color from yet another one. But we must careful while doing this and try the demos because not all appliers are interchangeable like this, except the ones from Lelutka.

Overall I am very happy with the head´s features and I will be even happier when a more mature look is available from them. As for our noob, his very last question was why he looked so milky white with no color while I looked dark.  My answer?  because I  tan!  Here,  grab some shoes and good luck in the morning! LOL. 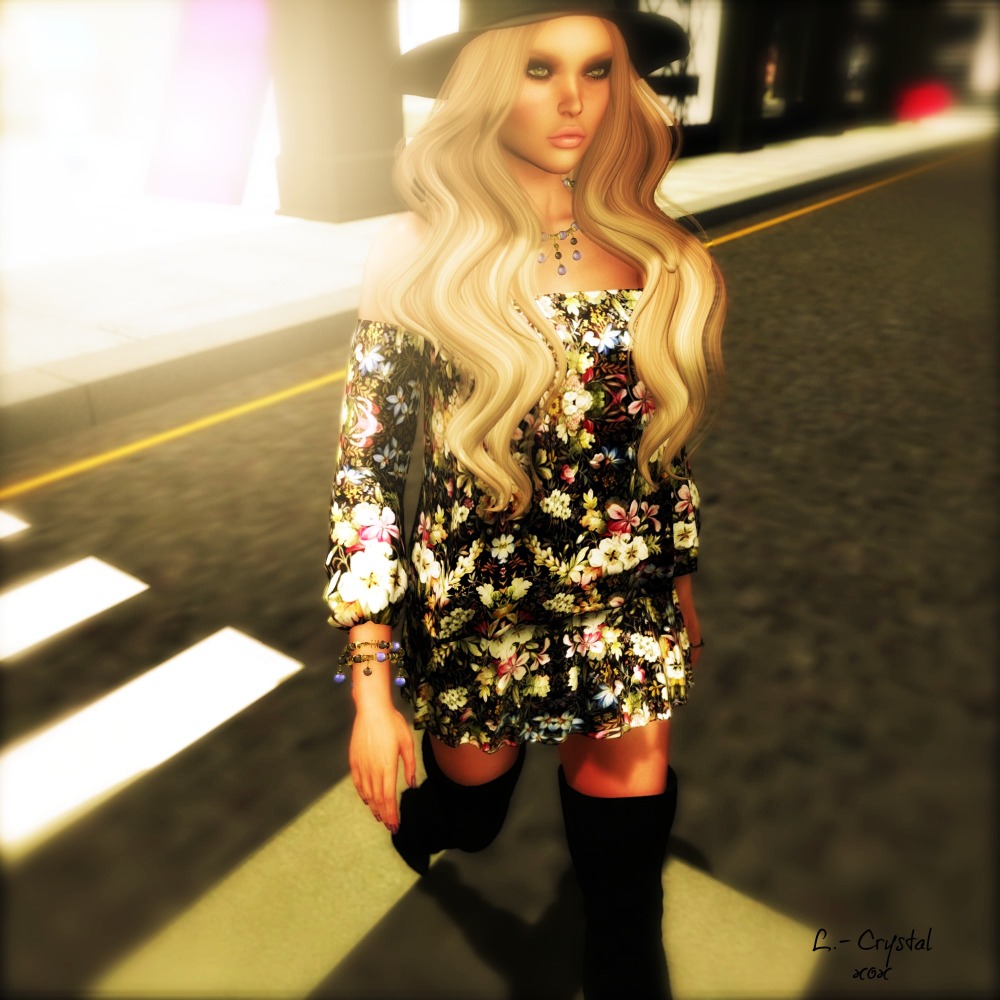 A young and flirty dress with a dropped waist that sits on the hips.  A straight across neckline and off the shoulder sleeves.

The gypsy like quality of the print reinforces its boho feel while rendering it super versatile.  The dress is available in several colored prints and comes with its own set of jewelry.